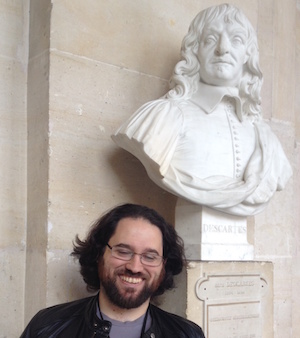 With Descartes at Versailles circa 2015.

Since the fall of 2021 I’ve been an Associate Professor in the Philosophy Department at the University of California Davis, after having been an Assistant Professor here since the fall of 2018. Prior to that I was a postdoctoral researcher in the Netherlands, working with Professor Catarina Dutilh Novaes on the Roots of Deduction project at the University of Groningen, where I worked on various connections between proof-theory and dialogue games. Prior to my stay in Groningen I worked with Greg Restall and Jen Davoren at the University of Melbourne on creating the, seemingly no longer available, MOOCs on Coursera, Logic: Language and Information 1 and Logic: Language and Information 2.

I did my PhD at Monash University in Australia under watchful eyes of Lloyd Humberstone, working on translations between modal logics.

I’m generally interested in any area of philosophy where formal methods can be fruitfully applied.